Building wooden boats: the story, quite simply, of passionate involvement 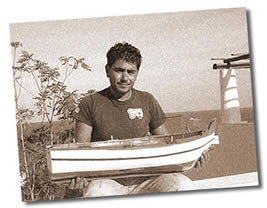 There was a child on an island, Panarea, whose great hobby was, with wooden fruit crates, constructing miniature wooden boat models, small brightly coloured fishing boats or fishing dinghies − it was this child’s original, creative approach to the marvellous playground of the sea.

It was his last year at school. He spent his afternoons at Corvo shipwright’s boat yard in Lipari, amid wood chips and hulls still towering like the backbone of a whale.
The shipwright, Corvo (which means ‘crow’), was a true workaholic! His assistant was a little black crow… “Screwdriver!” cried

the “big” crow, and the little one was soon there… with a screwdriver.
Corvo was painstakingly dedicated to his mission as a designer and builder, and so very attentive to his customers’ nee

ds that, if an order came in for a gold propeller, you can be sure Corvo would have installed one…
On the strength of his learning-time at Corvo’s yard, Tesoriero produced his first drawings for a real boat. He was putting military service behind him at the time, at the barracks. Then came all the work that goes into starting up a boat yard of ones own. On Panarea (an island, by the way, he would never dream of abandoning!). 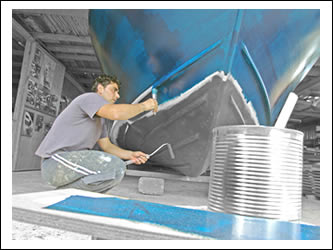 It takes an architect, a carpenter and a painter-decorator to design and build a wooden hull. It takes a lot of work, alone, with only a radio for company. It takes lots of music!
Three or four months will pass by, with ten hours’ labour a day − and then there’s a boat.

And the wood’s alive. It feels the weather ‘in its bones’. Sometimes it plays tricks on you. The board may readily yield to the shipwright’s tools all day, and s

plit that very evening. And there’s nothing for it but to start all over again…
But when you build a wooden boat with a keel as perfect as can be… well, there’s hardly anything in the world as satisfying as that!